“I want to lift people up, give them a sense of empowerment and redemption.”
-Ben Jones

Ben Jones’s mural Envision Empower Embrace, to be installed in the Laurie Art Stairway, is based on selected imagery from his recent paintings which address events related to social justice, climate change, and environmental disasters.  The central image of a fish is derived from a painting of 2010 with the same title, which floats over the surface of the mural.  As Jones has observed, “the fish image is used because throughout history many civilizations have used it to represent Life.” The fish frames an image of the renowned jazz singer and political activist Nina Simone who is the subject of Ben Jones’s commemorative painting Nina Simone High Priestess of Soul (1972).   Jones overlays the fish and the surrounding space with the text of a poem, “Mother Earth,” by Denise Tansley.  The poetic, lyrical expressive yearnings of this eco-poetry about the desecration of nature are reinforced by the loose, expressive, colorful paint spatters and the incorporation of oriental calligraphy and ancient African symbols.

The fish is flanked by excerpts from Jones’s painting of 2012 entitled Thank You BP (Wall Paper).  This multi-layered work aesthetically investigates the 2010 BP Deepwater Horizon oil spill in the Gulf of Mexico.  Stylized images of fish, butterflies, birds, and other creatures symbolize the victims of this environmental disaster. The all-over painterly composition evokes the action painting of Jackson Pollock, while the use of corporate logos of BP, Mobile, Exxon, Shell, and others evokes Pop art and mass media culture. The background text is comprised of excerpts from the poem “Are You Fit?” by Basanta Lohani.

She admonishes corporations, observing that their “greed acts the rider to tip the balance” towards depletion, pestilence, war, and crime. This call to action to save the planet is reinforced by the final images to the left and right which are excerpted from the painting Destruction, 2017.  The Deepwater Horizon tanker and ignited oil spills are accompanied by images of floating dollar bills evoking corporate greed, as well as fish, seashells, and a seagull, representing its disastrous ecological impact.

The international prohibition sign in red on each side of Envision, Empower, Embrace suggests that swimming or other activities are not permitted in these damaged areas.  At the same time, the inclusion of images of Donald Trump, Trayvon Martin, and Sandra Bland extends this powerful work into the realm of racism and social justice. The image of Martin is derived from Jones’s wallpaper installation of 2016, What’s Going On?, exploring his senseless murder in 2012. Jones also memorializes Sandra Bland, another of too many victims of police brutality and racial profiling, who died in 2015.  The inverted image of Trump evokes the idea of an indictment of the current President, related to the Black Lives Matter movement and the de-regulation of environmental protections.

Ben Jones’s mural is a powerful aesthetic and political statement, intended to inspire thought and action on the part of viewers.  We are invited to contemplate his work by occupying the chair that is to the right of the large central fish, as if to complete the mural.  This notion of collaboration is central to the creation of this digitally produced mural. The photographer and artist Peter Jacobs, a longtime resident of Montclair, worked with Ben Jones to create this work by taking pictures and editing them into this particular monumental composition.  Peter Jacobs himself is well known for his daily practice of creating collages.  Thus, his collage aesthetic truly complements that of Ben Jones. 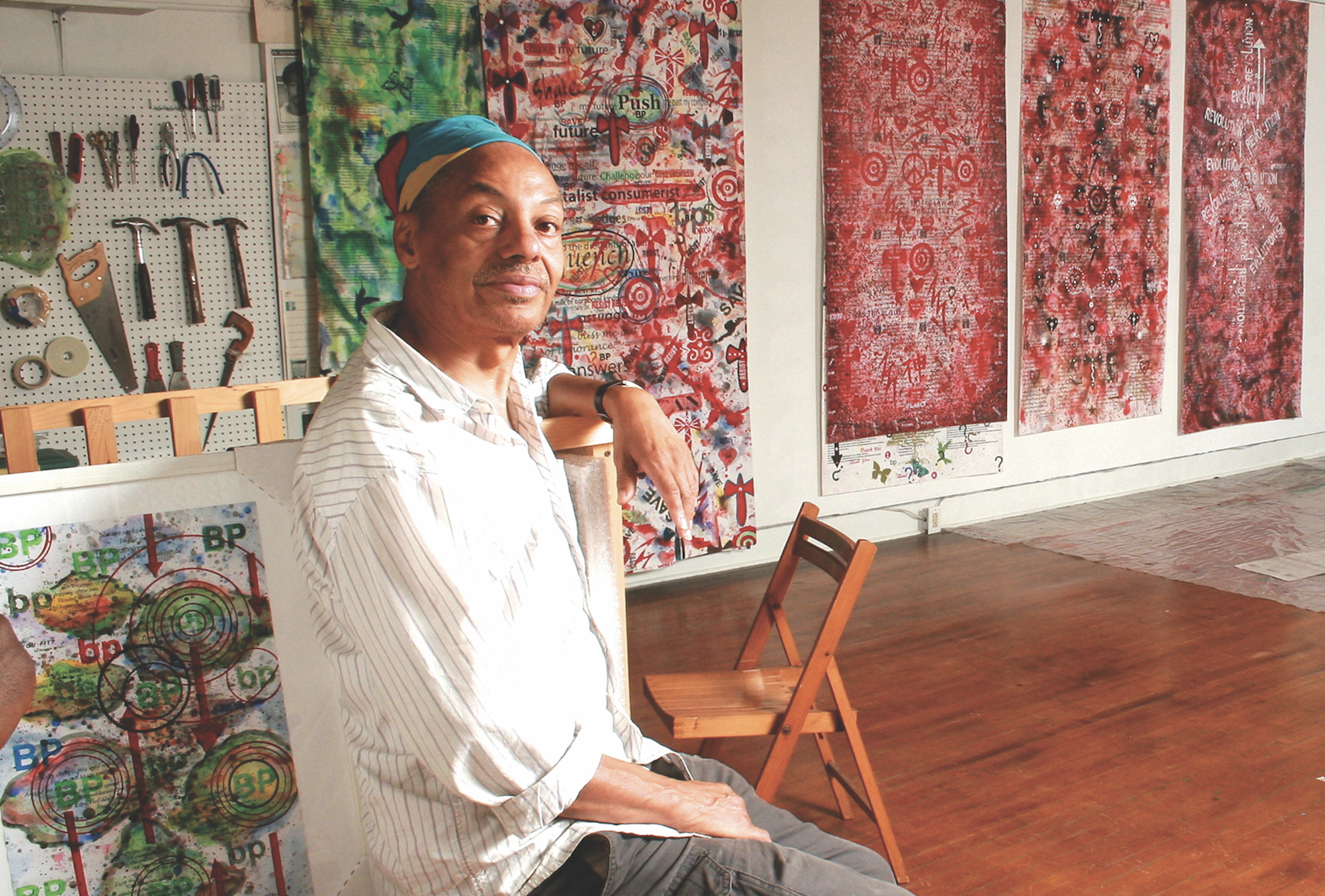