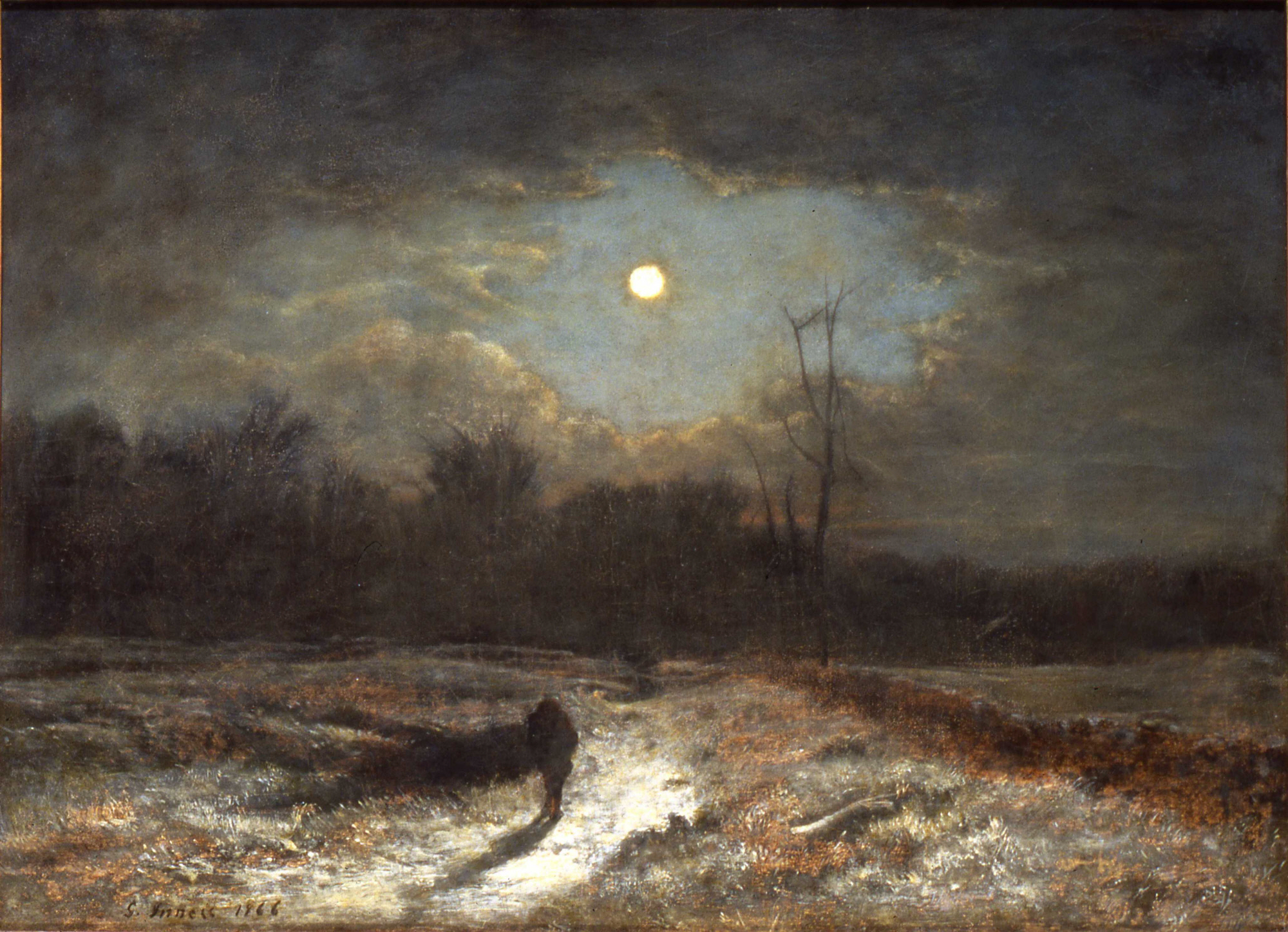 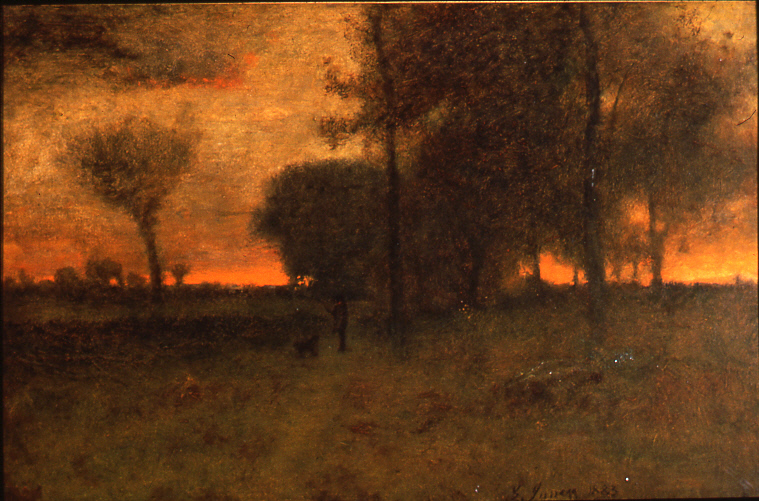 Welcome to the George Inness Gallery at the Montclair Art Museum, a generous gift of Frank and Katherine Martucci. I’m Adrienne Baxter Bell, Associate Professor of Art History at Marymount Manhattan College and an author of several books and articles on George Inness. Inness was one of the most important American artists of the nineteenth century. He painted more than 1100 oil paintings and works on paper; at the same time, he was a highly thoughtful amateur philosopher who write extensively on art and theology; in fact, he was frequently identified in the press and by his friends as a “metaphysician.” Inness was born in Newburgh, New York, in 1825. For most of his adult life, he lived and worked in New York and in Massachusetts. He took several trips to France, where he was inspired by the Barbizon landscape painters, and to Italy, where the Italian countryside stirred his imagination. In 1885, he moved permanently to Montclair and lived in a house at the corner of Grove and Columbus streets; he worked in a studio adjacent to the house. (The George Inness Gallery contains a work by George Inness, Jr., Inness’s son, that shows his father painting outside this studio.) In Montclair, Inness created some of his most renowned and thought- provoking landscape paintings. He died unexpectedly in 1894 in Bridge-of-Allan, Scotland; his memorial service was held at the National Academy of Design in New York. Over the years, several of Inness’s paintings and works on paper, along with a set of his brushes and palette, were given to the Montclair Art Museum, which now houses the finest collection of Inness’s work in the world.

Winter Moonlight is a most haunting scene, one that we remember long after we leave the Inness Gallery. There may be several reasons for this impact. First, the subject matter: a lone figure, seen only in silhouette, walks on a snowy path in a frozen, roughly hewn terrain. The low stone wall at the right seems to demarcate his future journey. In a setting nearly devoid of life, a dark bank of trees, also seen in silhouette, blocks our wandering gaze, while a skeletal tree in the middle distance embodies the spectral aura of the composition. Through these features, Inness may be alluding to the idea of a pilgrimage, even metaphorically to the path that we each take through life. A full moon breaks through a thick bank of clouds to reveal an improbably blue sky. The remarkable power of this moonlight may, in fact, have a scientific cause. As Inness scholar Michael Quick has noted, on the 20th and 21st of December in 1866, the moon reached its perigee, or point in its orbit when it is nearest to the earth, at a time when it was simultaneously closest to the sun, that is, during the winter solstice. This highly unusual astrological event made the moon extremely bright and probably inspired Inness to capture the scene on canvas. Finally, in 1866, Inness was deeply engaged with the writings of the eighteenth-century Swedish mystic Emanuel Swedenborg. One key principle of Swedenborg’s theology was that of “spiritual influx,” which holds that everything in nature is inanimate until imbued with life through what Swedenborg termed “the inflowing of God’s divine love and wisdom” from the spiritual world. This process is reflected in nature when light from the sun nourishes all organisms. The natural world is, therefore, continually changing. Inness conveyed this same idea when he observed, “The true end of Art is not to imitate a fixed material condition, but to represent a living motion. The intelligence to be conveyed,” he added, “is not of an outer fact, but of an inner life.” Therefore, with the enigmatic setting of Winter Moonlight, Inness may be referring to the mystical idea that nature is continually enlivened by spirit. Inness and his wife, Elizabeth Hart Inness, would be baptized in the Swedenborgian Church just two years later, in 1868.

To appeal to the market for paintings of Italian landmarks, Inness moved to Italy with his family from 1870 to 1874. There, he joined a tightly knit community of American and British expatriate artists who sold their works to visitors on the Grand Tour. Inness would often travel to the countryside to make sketches; back in his studio, he would translate some of these sketches into full-scale, detailed landscape paintings. With Old Aqueduct, Campagna, Rome, we can almost witness Inness at work in the Roman countryside, rapidly capturing a bucolic scene of two shepherds taking a brief respite while tending to their flock. The pink tonalities in the sky capture the elegiac mood of early morning. Many artists before and after Inness were inspired by the ruins of Roman aqueducts but none before had painted them with such extraordinary bravado. Here, Inness manages to convey the essence of each form with only a few brushmarks. His representation of sheep is particularly astonishing, as each one appears to have been conjured with no more than two or three rapid flecks of paint. In this way, Inness joins the ranks of some of the most virtuosic European artists, such as Titian, Rembrandt, and Velázquez, each of whom could persuade viewers of the reality of forms in nature with minimal, yet high expressive brushwork. The fact that we, Inness’s viewers, identify the forms in this painting as sheep draws us even closer to the artist and invites us to engage even more deeply with his work.

Although Inness spent the summer of 1883 in Milton, New York, and in Nantucket, it likely that he created Sunset Glow in Montclair. He had been renting an estate there since 1878 and the painting bears some features in common with a later work entitled “Autumn, Montclair, New Jersey.” Parts of the landscape are clear, notably the division of the scene into horizontal bands of sky and terrain, and the nearly mathematical demarcation of the horizon at intervals by attenuated trees. The rest, however, remains a mystery. We are drawn to the two forms at the left of center: the hunter with his dog. Who is this man? What does he represent? One reading holds that Inness included him to provoke a narrative; it may be his home that we see as a tiny fleck of paint at the horizon. And yet, the narrative remains open-ended. The character of the setting reinforces this sense of ambiguity. As he often did in the final fifteen years of his life, Inness represented sunset, a liminal event bridging afternoon and evening. It is a time of day akin to the hazy state bridging sleeping and waking, consciousness and the unconscious. We know that, at this point in his life, Inness began to engage even more deeply with the religious principles of Emanuel Swedenborg and that they offer theories on the relationship between the natural and spiritual realms. One key idea was that the spiritual realm might be accessed not only after physical death but through a change in psychological state, a change in consciousness. Seen in this light, Sunset Glow invites us to use the most commonplace events in our lives—for example, contemplating a sunset at the end of the day—to consider larger, metaphysical issues. Surely one of the most thoughtful artists of his generation, Inness summarized these issues for us toward the end of his life. In his final interview, he observed that his lifelong quest was the following: to know “what it is that is in myself, what is this thing called life, and how does it operate.”